Trump Does It Again... 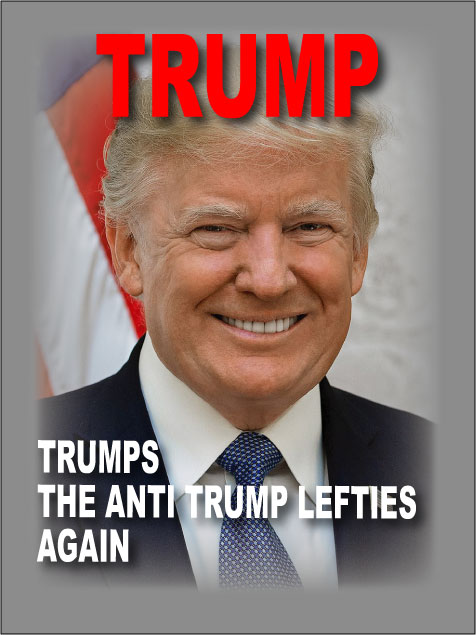 There have been several attempts by the deep state to get the Trump Administration (and the nation) involved in some kind of QUAGMIRE, but to date, President Trump has not only resisted the urgings by deep staters, he has effectively thwarted their efforts on more than one occasion.. THEY want the U.S. bogged down in a war so they can hammer Trump (and you and I) into the ground, from now until the 2020 election.  The strategy was used against former Pres. Bush, when he took our forces into Iraq, and THAT Quagmire significantly influenced the 2018 election, which then gave us Barrack Hussein Obama...  Continue Reading HERE...

This is the year of the Campaign Crisis, we have some vile RINO's challenging Trump for the Republican ticket. This is either short sighted or deliberate action by the Hidebound Republican Establishment conniving to stop Trump.

As I see it, when Trump wins the Primaries, these turncoat traitors, in concert together, or maybe only one of them, will launch an independent campaign similar to the Campaign Ross Perot did.

Remember both times Perot hung in there collecting votes, until it was mathematically impossible for Billy Clinton to lose, then he quit. Both Times! In effect, it was Ross Perot who stole enough votes to insure Clinton won the election.

Look for other Turncoats, or Deep State RINO's to do the same in 2020.

We the People on the other hand, should have already started measures to stop the ones who would work against the people by splitting the votes, and allowing the Democratic/Socialists to overwhelm the election.

I call the Democrats what they have become; "Democratic/Socialists." I do that because over the past 70 years, they have moved steadily farther towards Socialism as the Iron Fisted Governance of the people, once claimed only by Fascists and Communists. The Democratic Party, started out as, and has always been, the Party of Slavery. Now they have discarded their Sheeps Clothing to reveal the Real Wolves they are. They now have aspirations of enslaving the entire population of America by every means at their disposal.

IF TRUMP LOSES, THE AMERICA WE KNOW AND LOVE WILL CEASE TO EXIST!

We need to educate of the public on this potential fiasco in the making.

We need to educate the public of what a Democratic/Socialist win will mean to our Liberty and Freedoms.

We need to educate the public on what the Democratic/Socialists will do to destroy the Constitution.

We need to publicly and loudly oppose the Propaganda Mill and Corrupted Main stream Media is pushing to advance the agendas of the NWO,LGBTQ,Islamic Sharia incursion/replacing of our Constitutional Laws.

We need to educate the public on the war the Left is waging against our Religious Freedom by constantly attacking Christianity and Judaism through biased Liberal Judges Legislating from the bench.

We especially need to educate the people on the dire necessity of going to the polls to oppose the Democratic/Socialists and vote every one of them out of power if we want the reprieve we need to restore America and our Rule by Law.

We must push this over and over through every media that we have access to;

"NOT GOING TO VOTE = A VOTE FOR THE DEMOCRATIC/SOCIALISTS AND THE LOSS OF AMERICA."

"VOTING FOR ANY THIRD PARTY NO MATTER HOW CHARISMATIC = A VOTE FOR THE DEMOCRATIC/SOCIALISTS AND A LOSS OF AMERICA.

I know it has been said many times before, to the point of it becoming a cliche', This election is the watershed moment of our times. It will determine which way America goes into the future. Will we remain a Constitutional Republic, or, will we become what the NWO wants... Another loser Socialist cog in their wheel of world dominance?

It will not be the last time we need to unite against the Dark and Evil Forces that are arrayed against us. They will be with us as long as good people turn a blind eye to what they are doing because they are distracted by false visions of being taken care of with no effort on their part. In short, the Socialist - Cradle to Grave BULLSH*T.

Once Trump wins and we manage to get a large majority in both Houses of Congress, we will have to demand our State Legislatures petition Congress for an Article V Amendment Convention where the People have control and Congress must step back and take what we give them. Things like Term Limits example;

2. Clarification of the meaning of the Second Amendment using the definition that was in general usage of the term Arms in 1781 and the repeal of every Federal and State Law that infringes or restricts law abiding citizens from being armed Felons excluded unless their rights are restored by a citizens panel.

3. Ending Raises for Congress unless voted for by the citizens of the US.

4. Forbidding Congress from exempting itself from laws it passes.

Plus anything else the people want to take back their power that has slowly been stolen from them by the Government.

Will the Bernie Bros Burn Down the Democratic Party?

After Democrats Purge All the 'Nazis,' Who Will Be Left?

The Myth of Bernie Sanders’s Honesty

Barack Obama: A Traitor for the Ages

The Propaganda of Single-Payer Healthcare

The looming collision between electric vehicles and green energy

AG Bill Barr: Will he or won't he quit? The narratives change by the minute

A moral voice for President Trump