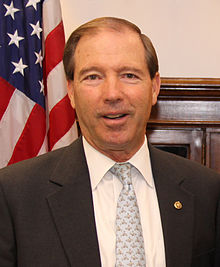 What follows is a letter that I recently received from our NM U.S. Senator Tom Udall in response to my email of November 18, 2011 regarding the “Explosion Of Big Corporate Influence Over Our Politics” (Senate Joint Resolution 29 (S. J. Res. 29), along with my response:

“Thank you for contacting me

Thank you for contacting me regarding Senate Joint Resolution 29 (S. J. Res. 29), an amendment to the United States Constitution that I introduced in the Senate relating to contributions and expenditures intended to affect elections and campaigns. I appreciate hearing from you on this important issue.

Last year's Supreme Court decision in Citizens United v. FEC places a new emphasis on the need for Congress to act. Citizens United was a victory for special interests at the expense of the average American.  It held that corporations deserve the same free speech protections as individual Americans, enabling them to spend freely from their corporate treasuries on campaign advertising.  It also gave rise to so-called "Super PACs", which can raise and spend unlimited funds to campaign for or against candidates.

While the Citizens United decision sparked a renewed focus on the need for campaign finance reform, the Court laid the groundwork for a broken system many years ago.  In 1976, when the Court held in Buckley v. Valeo that restricting independent campaign expenditures violates the First Amendment right to free speech, it established the flawed precedent that money and speech are the same thing.  Since then, our nation's policymakers are all too often elected based on their ability to raise money or the size of their personal fortunes, rather than the quality of their ideas or dedication to public service.

These decisions, among others, demonstrate the Court's willingness to rule broadly and ignore longstanding precedent to declare our campaign finance laws unconstitutional.  Because of this, I believe that the only way to fix the problem is to first amend the Constitution to grant Congress clear authority to regulate the campaign finance system.

That is why I introduced S. J. Res. 29 on November 1, 2011, along with my colleagues, Senators Michael Bennet (CO), Tom Harkin (IA), Charles Schumer (NY) and Jeff Merkley (OR). This amendment would authorize Congress to regulate the raising and spending of money for federal political campaigns, including independent expenditures, and allow states to regulate such spending at their level.  It would not dictate any specific policies or regulations. Instead, it would allow Congress to pass campaign finance reform legislation that withstands constitutional challenges. Upon introduction, S. J. Res. 29 was referred to the Senate Committee on the Judiciary, where no further action has occurred.

I believe that elections should be about who has the best ideas to move our country forward, not who has the biggest checkbook, and I will continue to fight for reforms to help ensure that democracy, not money, control elections.

Thank you again for sharing your thoughts with me.  Please feel free to contact me with your concerns regarding any federal issue by visiting my website at www.tomudall.senate.gov.  For more information, you may also visit my Facebook page at http://www.facebook.com/pages/Senator-Tom-Udall/106433512869 and receive up to the minute updates through my Twitter page at http://twitter.com/senatortomudall.

Thank you for your speedy response to my letter of November 18, 2011 regarding Senate Joint Resolution 29 (S. J. Res. 29), an amendment to the United States Constitution that you introduced in the Senate relating to contributions and expenditures intended to affect elections and campaigns.

I truly appreciate hearing from you regarding this important issue, but am extremely concerned about your silence regarding six other issues that were included in my letter, which I believe are just as important because, if valid, they would covertly take electoral power away from ordinary citizens and, as a result, could have the greatest negative impact on our electoral system and ultimately infringe on our Constitutional Rights.

Additionally, much to my dismay to date I have not received a response from you regarding the following issues that I find just as disturbing:

I. On or about August 9, 2011, I wrote to you and shared the following website with you that revealed Mr. Soros’ personal and professional/political background, his agendas, which I honestly found to be anti-American, his establishment of the Open Society Institute (OSI) in 1979 and was one of the prime movers in the creation of the so-called "Shadow Democratic Party" or "Shadow Party" in 2003:

Guide To The George Soros Network:

In this same letter I also provided you with the following website that revealed that Mr. Soros was one of your major political campaign contributors, along with your voting record while you were a member of the Progressive Caucus in the House of Representatives that seemed to be in line with some of Mr. Soros’ agendas that I consider, in part or as a whole, to be anti-American:

In this letter I informed you that I believed that President Obama’s recently released “Certificate of Live Birth” had been found to be fraudulent by an international expert on scanners and document-imaging software who had filed a 22-page criminal complaint with the FBI to that effect and provided you with the following sources that contain detailed information regarding subject complaint:

In this same letter I also provided you with the following additional information regarding this disturbing issue:

On or about June 10, 2010, it was revealed that Mr. Tim Adams, a college instructor, who worked as a senior elections clerk for the city and county of Honolulu from May 2008 through September 2008, made a stunning claim that President Obama was definitely not born in Hawaii as the White House maintains, and that a long-form, hospital-generated birth certificate for him did not even exist in the Aloha State.

On or about January 20, 2011, it was also revealed that Mr. Adams had signed an affidavit swearing that he was told by his supervisors in Hawaii that no long-form, hospital-generated birth certificate existed for Barack Obama Jr. in Hawaii and that neither Queens Medical Center nor Kapi’olani Medical Center in Honolulu had any record of Obama having been born in their medical facilities.

On or about June 12, 2011, the following article and/or blog post revealed overwhelming evidence that we in fact have a fraud and a usurper that resides in the people’s White House, despite the overt lack of journalistic investigating on the part of the American press. The new evidence indicates that the conspiracy to carry out that fraud was much broader than originally thought, which includes a forty-year story that requires a book, not a column, to tell because the evidence suggests that our President was being groomed from a very young age for the moment in history that would end American supremacy in the world, and usher in a new era of Global Marxist Governance.

On or about June 13, 2011, retired Maj. Gen. Paul Valley revealed that the “Certificate of Live Birth” that was released by the White House, on or about April 27, 2011, as “proof positive” of President Obama’s Hawaiian birth was a forgery, but that the FBI was covering the fraud and no one in Congress was willing to tackle the situation because of fears of a “black backlash,” if the failings of the nation’s first black president were revealed.

As I’ve also stated before, my main purpose and/or reason for sharing all of the above information with you is simply to get your feedback as to the validity of the information, which I truly hope and pray is misinformation for the sake of our State, Country and ultimately our Republic.

Please feel free to contact me at my home address listed below my name should you have any questions regarding any of this information.

Automatic Electronic Response Received From Senator Udall’s Office Regarding My Email Above:

Thank you for your message!

I look forward to reviewing your comments and questions.

Before you leave, I hope you'll explore my website. On this page, you can learn more about the work that I've been doing on Campaign Finance & Election Reform as your U.S. Senator.”

Note: For your information, I have also provided a copy of my emails regarding this disturbing matter to Congressman Allen West.

Note:  My following blog posts contain numerous articles and/or blog posts and videos that relate to this disturbing issue-You Decide:

Where Is America Today?

Note:  If you have a problem viewing any of the listed blog posts please copy web site and paste it on your browser. Be aware that some of the articles and/or blog posts or videos listed within the contents of the above blog post(s) may have been removed by this administration because they may have considered them to be too controversial.  Sure seems like any subject matter that may shed some negative light on this administration is being censored-What happened to free speech?-You Decide.

May you and yours have a Happy & Joyous Thanksgiving. God Bless-Keep The Faith.

In my Opinion Udall is as hard Left as Obama and he wants to see the power vested in professional Politicians (Elitists) like him, Pelosi,& Reid

No Matter Their Location, Jews Are The Scapegoat

The Death of Socrates and America?

To Survive, Republicans Must Become the Party of Liberty

Antisemitism And The Anti-Semites

What Happens if the Election Audits Go Trump's Way?

Some yapping from Chihuahua: Mexican beauty queen with Miss Universe title wants to tell us how to run our country

How far can Congress go in forcing new cybersecurity measures on the private sector?

Mass shootings and the Constitution

CDC must come clean on the COVID vaccine and previous infection